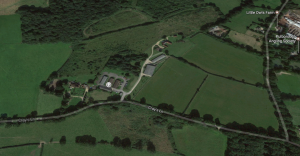 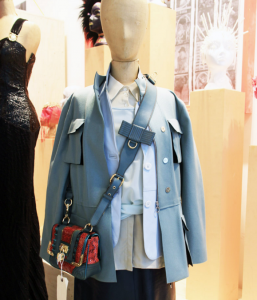 1 December 2015, BRIGHTON – We are delighted to announce that you can now buy Designer Jumble at the wonderful Merlin & Ellis boutique in Brighton’s trendy Kemp Town. The shop’s owner, Ellis, sells great secondhand fashion, alongside handmade leather accessories, gorgeous fragrances and other treasures, and you will also love his coffee. Park in the Morrison’s Car Park, accessible via Dorset Street, if you visit. And say hi from us! 9 Manchester Street, Brighton BN2 1TF

1 October, 2015 – For the first time in Designer Jumble’s popup history, ALL our stock (and that’s approximately 10,000 pieces) will be under one roof. We are moving today, to a beautiful office in the heart of West Sussex, amid cows and fields in a village called Thakeham. The new space, all 1,300 square foot of it, is at Crays Court, Crays Lane, and we will be open for individuals to come view the whole collection – but only by appointment only. So please email abi@designerjumblesale.com to book 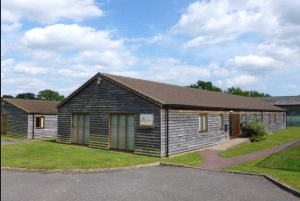 Today the Issey Miyake corset that many of you will have seen at our Westfield shop went under the hammer… and took a whopping £38,000! The even better news is that it has sold to a reputable museum, so will be kept for posterity.

Auctioned on our behalf by fashion expert Kerry Taylor, it was an incredible result for an item that we discovered, unbranded, in a workshop amid circus props and costumes. The design, a corset in moulded resin featuring nipples and a bellybutton, was created in limited edition by the great Issey Miyake as an art piece in 1984, exploring attitudes to the female body. A black version was memorably modelled by Grace Jones in an image by Greg Gorman, 1995. Amazingly, this red edition was bought by the vivacious Hannelore Smart, then wife of Circus King Billy Smart Jr, and regularly worn by her – as fabulous photos in the family album attest. We had it authenticated by Issey Miyake, and sold on behalf of the family – who generously donated a share of the proceeds to the Alzheimer’s Society.

It is good to know, as it heads off to a new life behind glass, that this corset was really loved and put to use, as great design should be.

The Designer Jumble Sale has been awarded a free space on Camden High Street this June, as the winners of a Collective and We Are Pop Up competition. Collective is a pioneering project putting Camden Town at the heart of the UK’s creative community, led by Camden Town Unlimited (Business improvement district) and supported by the Mayor’s Regeneration Fund and Camden Council.

This is a timely choice, amid news that more shops than ever stand empty on British high streets while reports show that a new generation of shoppers are choosing trade that supports communities and sustainability. (See http://metro.co.uk/2013/05/20/the-number-of-empty-high-street-shops-reaches-a-new-11-9-per-cent-high-3800886/ and http://www.fastcompany.com/3012446/creative-conversations/the-sharing-economy-comes-of-age.)

“Designer Jumble has hit the zeitgeist: fabulous fashion but in a fun environment. It has reinvented shopping for the next decade of the high street. I love it!”

What is the Designer Jumble Sale?

This is the second such victory for the Designer Jumble Sale since it launched just 6 months ago. The Designer Jumble Sale opened its first popup shop in December 2012, after winning a rent-free space on London’s prestigious Lambs Conduit Street, courtesy of retail agent Farebrother. The shop recorded high density sales per square foot from a standing start.

The shop demonstrably increased footfall to the street and gained good press coverage (including being named one of the five best popups by The Evening Standard in December 2012). It also gained the approval of neighbouring retailers and landlords. “The Designer Jumble Sale were a pleasure to deal with and added greatly to the retail environment of Lamb’s Conduit Street,” says Toby Fuhrman, Associate Partner, Farebrother.

Says Chisman: “It is a silver lining to the cloud hanging over our high streets: that small independent businesses like ours can afford to bring new enterprise to spaces that would otherwise stand empty.”

A new kind of business, reinventing the high street

The Designer Jumble Sale works with agents and landlords to cover the business rates on empty spaces, increase footfall, drive social media awareness of places, and create new customers for neighbourhoods, as well as promote community cohesion, through special events and tie-ins with existing local retailers.

It is a mobile business, always ready to move into a new space at a week’s notice; it has the feel of a local shop but the work ethics of a chain, boasting a carefully curated stock that is refreshed every week giving locals new reasons to return to their main shopping streets; it brings its own loyal customer base with it and uses social media to embed itself within each new community.

It also has a very clear ethical mission. It aims to promote recycling, sustainable fashion, fair trade, craftsmanship, new talent and holds a well-established charity sale every six months, during London Fashion Week, which appears on the official London Fashion Week events schedule at londonfashionweek.com, with the blessing of the British Fashion Council. All profits from this one-day event go to charity. To date, the Designer Jumble Sale has helped raise thousands of pounds for charities including Medicins Sans Frontieres, The Ovarian Cancer Trust, JustForKids Law and the Central London church where the events are held, The Church of the Annunciation Marble Arch.

In May 2013, The Designer Jumble Sale also opened a popup in Willesden Green, to participate in a community project helmed by Meanwhile Space (Community Interest Company). The idea is to give local women a compelling reason to return to their high street. Brands in the shop include Gucci, Chanel, Alexander McQueen, Prada, Vivienne Westwood and Marc Jacobs; prices range from £10 to £350. And initial figures are positive: courting only local publicity, the shop saw a very good sales density from the first week.

Where to find the Designer Jumble Sale

Plus a one-day special charity sale on 18 September 2013 at The Church of the Annunciation, Marble Arch, London W1H 7AH

Oh, TwentySomethingLondon, you make us blush…

“The wonderful Abi will be hosting yet another shopping extravaganza…”

Their words, not ours. But we do love it.
Thanks to the fabulous team at TwentySomethingLondon for supporting our next popup, opening at 69 Camden High Street on 25 June FOR ONE WEEK ONLY.

After a tremendous experience in Bloomsbury, it’s time for us to move on and our last day of trading at the shop on 70 Lamb’s Conduit Street will be 15 May.  After that we have several proposals for our next site which we are waiting to finalise.

You can always find out where we’ll appear next by visiting this site or by following us on Twitter or liking us on Facebook.